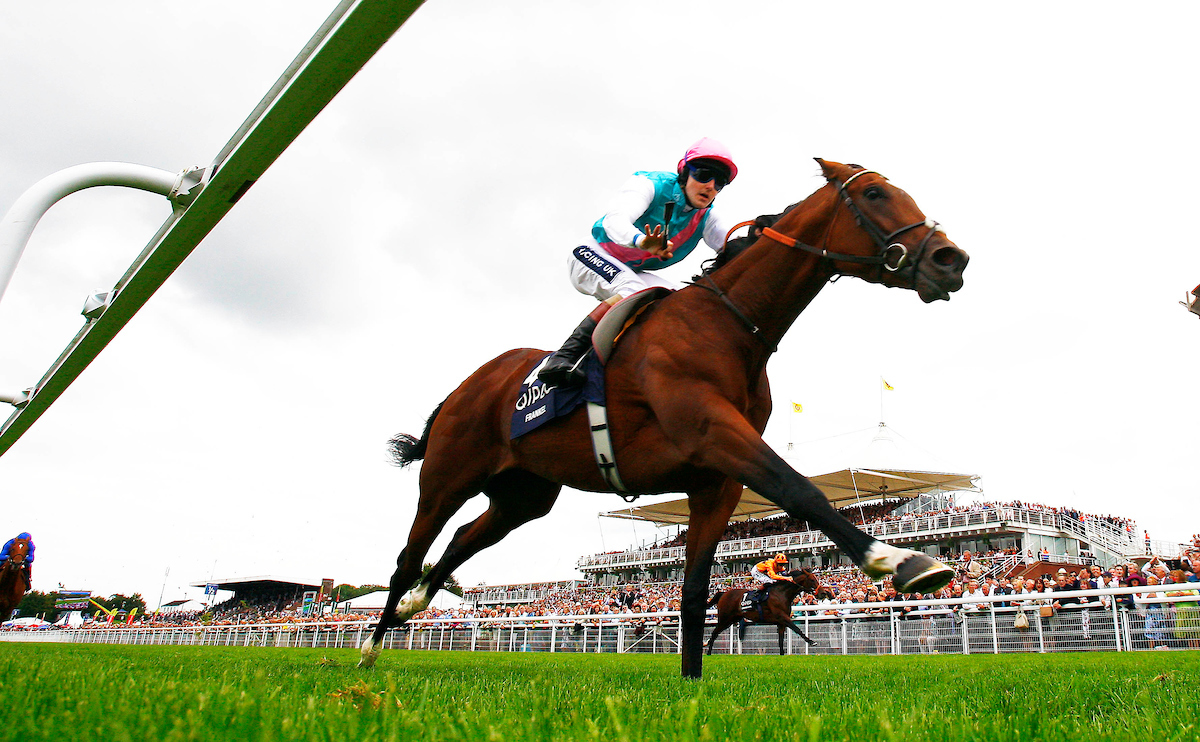 Many wonderful champions feature among the Sussex Stakes roll of honour but Frankel, the first horse to be inducted earlier this year into the QIPCO British Champions Series Hall Of Fame, stands alone as the only two-time winner of the great race.

This week marks the tenth anniversary of his first imperious victory in the mile showpiece when he beat older opposition for the first time and provided affirmation that he was something out of the ordinary.

His clash with the outstanding Canford Cliffs was billed as The Duel On The Downs and in the build-up racing fans were divided as to which of their pair would prevail. Frankel eventually went off at 8/13 with Canford Cliffs 7/4, although initially the latter had been preferred in the ante-post betting.

Frankel lined up unbeaten in seven starts and had already been successful in the QIPCO 2000 Guineas and St James’s Palace Stakes that summer, while Canford Cliffs, trained by Richard Hannon Sr, arrived seeking a sixth consecutive Group 1 win – a sequence that had begun with victory in the previous year’s Sussex Stakes. On his most recent start, he had conquered the brilliant Goldikova (who would end her career with 14 Group 1 wins) in the Queen Anne Stakes at Royal Ascot.

What a horse, what an owner breeder 🙏

Rio De La Plata, a triple Group 1 winner, and Rajsaman, another smart performer, also lined up but odds of 22/1 for each reflected their chances of upstaging the big two.

In truth, The Duel On The Downs never materialised and was more like A Sussex Saunter. Frankel settled beautifully in the lead and when invited to put his stamp on proceedings, about a furlong and a half from home, quickly bounded clear under Tom Queally.

Canford Cliffs stalked him throughout but his customary turn of foot was blunted by the relentless galloper in front of him. His fate was sealed even before he began to hang violently left in the closing stages.

Frankel won by five lengths from his principal challenger but it might easily have been more. The handicapper’s response was to raise his already lofting of 130 to 135. Canford Cliffs was subsequently found to have picked up an injury and was retired to the breeding sheds.

“I thought he would win easily but didn’t want to say. I have too much respect for the others,” Sir Henry Cecil, the trainer of Frankel, said. “I think he’s the best horse I’ve ever seen, with Blushing Groom and Shergar. I can’t go further back than that as I wasn’t around.”

Twelve months later, Frankel returned to defend his crown and, by now, it was evident he was operating on a different level to that of his counterparts. He had raced once more in 2011, when winning the Queen Elizabeth II Stakes by four lengths on QIPCO British Champions Day, and had recorded similarly spectacular wins in the Lockinge (by five lengths) and Queen Anne (11 lengths) on his first two starts in 2012.

Frankel faced just three rivals at Goodwood and one of those was Bullet Train, his stablemate, deployed as a pacemaker. However, he still faced a credible rival in Farhh, beaten half a length by Nathaniel in the Coral-Eclipse on his previous start having been a close third to So You Think in the Prince of Wales’s Stakes before that.

One of the most prestigious races in the calendar ended up resembling a routine piece of work. Bullet Train dutifully set honest fractions before Frankel breezed upsides three out, whispered words of thanks in his ear and then effortlessly zoomed clear. It was another exhibition of his beauty and brutality, with Queally motionless. “Every moment spent on his back is a special moment,” the jockey said. “He’s a class apart and does it all very easily. All I have to do is steer.”

Farhh stuck admirably to his task but was flattered to be beaten “only” six lengths. The following season he himself would win the Lockinge and QIPCO British Champion Stakes.

Frankel matched Rock Of Gibraltar’s European record of seven successive Group 1 wins with his second Sussex exhibition and, upped in distance, would go on to surpass that with further victories in the Juddmonte International and QIPCO Champion Stakes before being retired and embarking on a hugely successful second vocation as a stallion. His success story has many more unwritten chapters.