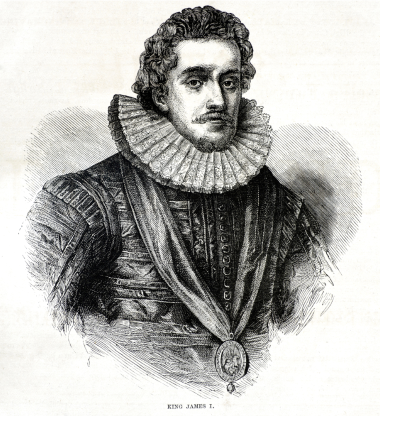 The son of Mary, Queen of Scots, James VI had been the long-reigning King of Scotland prior to becoming King of England as James I in 1603. He was the first monarch of England from the House of Stuart, succeeding the last Tudor monarch, his mother’s first cousin, Queen Elizabeth I, who died without children.

His greatest contribution to the sport of horse racing – although it happened almost accidentally – was to establish Newmarket as its headquarters. He first visited the area in 1605, two years after inheriting the throne, to hunt with his hounds and falcons. He developed a liking for Newmarket Heath, often lodging at an inn called The Griffin in Newmarket itself. Eventually, finding The Griffin’s facilities too primitive for his tastes, he built a palace on its site. King James sponsored races at Enfield and Croydon. He was also fond of gambling and played for high stakes. He is reputed to have once given a party to which no one was admitted with less than £300 cash on them.

But the Crown of England resting on a Scottish head was not universally popular with English nobility, one of whom expressed his anger when King and his Court attended Croydon Races in 1611. He took his riding whip and struck a blow at one of the King’s courtiers, Philip Herbert, but failed to evoke a retaliatory response. The King, who had witnessed the incident, praised Herbert for his benign reaction in the face of insult and created him a knight, a baron and an earl on the spot.

In April 1617, King James attended Lincoln races on the Carholme, standing on a specially erected scaffold set up for him to obtain the best view of the “Great Horse-race on the Heath”. Not content with being merely a spectator, he bred horses on the royal studs at Newmarket and Eltham, and those at Tutbury, in Staffordshire (founded by Queen Elizabeth I) and Malmesbury in Wiltshire. He also imported bloodstock from the Middle East, among them the Markham Arabian. Sadly, the horse was no great shakes on the racecourse and was well beaten in all his starts, but he was at least a forerunner of the three foundation stallions, from whom every racehorse throughout the world is descended.

King James I died in 1625. He was succeeded to the throne by his son King Charles I.