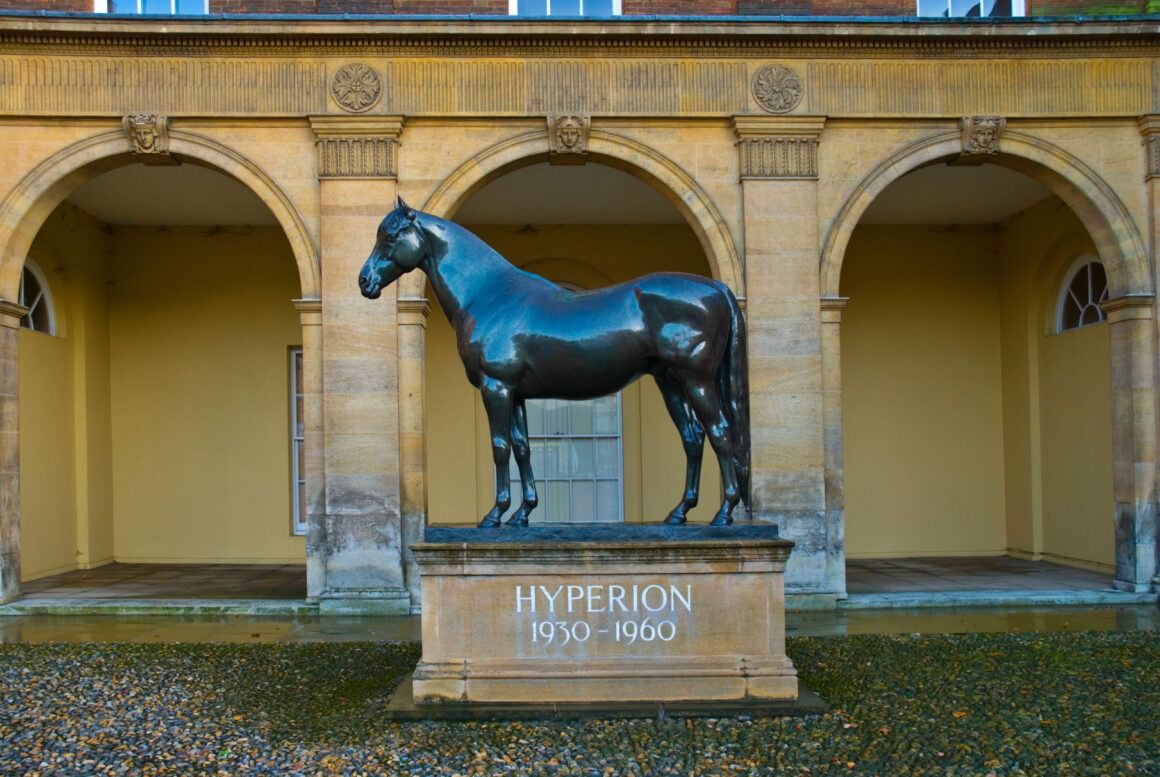 Bred and owned by the 17th Earl of Derby and trained during his two- and three-year-old seasons by George Lambton at Newmarket, Hyperion was among the best Derby winners of the 20th century and went on to become one of its most influential  stallions.

A chestnut with four white socks, he was by wartime Triple Crown winner Gainsborough out of Nassau and Park Hill Stakes victress Selene. He stood under 15 hands when entering training and was only 15 hands 1½ inches when winning the Derby, the smallest since Little Wonder 93 years earlier.

Hyperion had finished fourth on his racecourse debut at Doncaster but then went to Ascot where he won the New Stakes (now the Norfolk Stakes) easily by three lengths from 21 opponents. Later that season he won the Dewhurst Stakes and ended the campaign rated the second-best juvenile colt.

Not having been entered for the Guineas, Hyperion began his three-year-old campaign in the Chester Vase, winning decisively by two lengths. He started favourite for 1933 Derby and never gave his supporters a moment’s worry, winning officially by four lengths – although it looked nearer eight – in the hands of Tommy Weston. He then won Ascot’s Prince of Wales’s Stakes and finished the season with an effortless three-length triumph in the St  Leger, with the winners of the Irish Derby and Prix du Jockey Club (French Derby) among the 13 opponents trailing in his wake. He was rated the season’s champion three-year-old by a margin of 9lb.

Following two disappointing defeats at four in the Ascot Gold Cup and Newmarket’s Dullingham Stakes, Hyperion, handled now by Colledge Leader, who had succeeded Lambton as the colt’s trainer, was retired to Lord Derby’s Woodland Stud at Newmarket and went on to become an outstanding success. He was champion sire six times between 1940 and 1954, his offspring winning 11 Classics within the span of seven years from 1940, including the 1942 fillies’ Triple Crown heroine Sun Chariot.

He sired Aureole, who won the King George VI and Queen Elizabeth Stakes and was twice champion sire in Britain, while another of his sons, Heliopolis, was champion sire in America. Other sons upheld his name in Australia, New Zealand, South Africa and Argentina. Meanwhile, his daughters became the dams of classic winners including Parthia, Carrozza, Ribocco, Ribero and Waterloo, plus American Triple Crown hero Citation. Hyperio sired the winners of 748 races and his line proved a major influence in the evolution of the Thoroughbred. His statue stands today outside the headquarters of the Jockey Club in Newmarket.