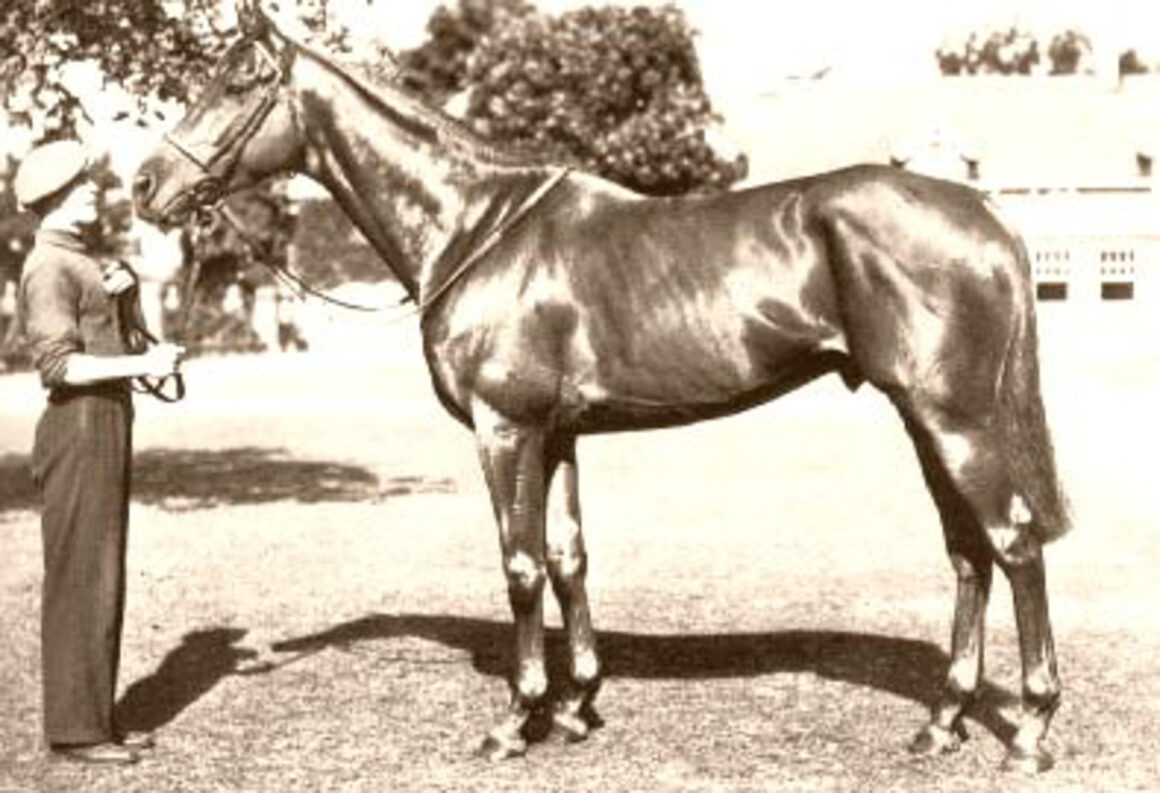 The last of the many great horses bred by Lord Derby, Alycidon was one of the greatest post-war stayers. A son of the Italian-bred Donatello II out of Hyperion’s daughter Aurora, Alycidon was trained for Lord Derby by Walter Earl at Stanley House, Newmarket.

Given plenty of time to mature, Alycidon was unplaced in both starts as a two-year-old. In his first outing at three at Hurst Park, he whipped round at the start and took no part. From then on he always wore blinkers, registering his first success next time out in the Thirsk Classic Trial. He then finished a creditable third in the Chester Vase and, 13 days later, won over 10 furlongs at Manchester.

Despite victories in Newmarket’s Princess of Wales’s Stakes and the St George Stakes at Liverpool, Alycidon started a 20-1 outsider for the St Leger. Attempting to make all the running, he was collared in the final furlong by the American-bred Black Tarquin who beat him by 1½ lengths. He was never beaten again, ending the season with victories in the Jockey Club Stakes and the King George VI Stakes, the latter a two-mile race for three-year-olds, in October.

Ridden throughout by Doug Smith, who had taken over in Lord Derby’s famous black and white colours following Harry Wragg’s retirement in 1946, Alycidon began his four-year-old campaign by winning Chester’s Ormonde Stakes followed by a two-mile two-furlong contest at Doncaster.

In the Ascot Gold Cup he faced his St Leger conqueror Black Tarquin, who started favourite at 11-10 on with Alycidon at 5-4. Alycidon had the services of two pacemakers, Benny Lynch and Stockbridge. Stockbridge made the running for the first mile, then Benny Lynch took over and led the field until approaching the straight, where Alycidon moved to the front. Black Tarquin ranged up to join him with two furlongs left to run and they raced together for about 100 yards, then Alycidon’s superior staying power saw him gallop clear to win by five lengths. The race had proved to be one of the great duels of the century.

Alycidon went on to win the Goodwood Cup and finished his career by winning the Doncaster Cup by eight lengths.

At stud, he was leading sire in 1955 and second in both 1958 and 1959. His best son was Alcide, winner of the St Leger and the King George VI and Queen Elizabeth Stakes. By far his best daughter was the 1955 fillies’ Triple Crown heroine Meld.

Alycidon was retired from stud duties in 1963 and was humanely put down later that year.