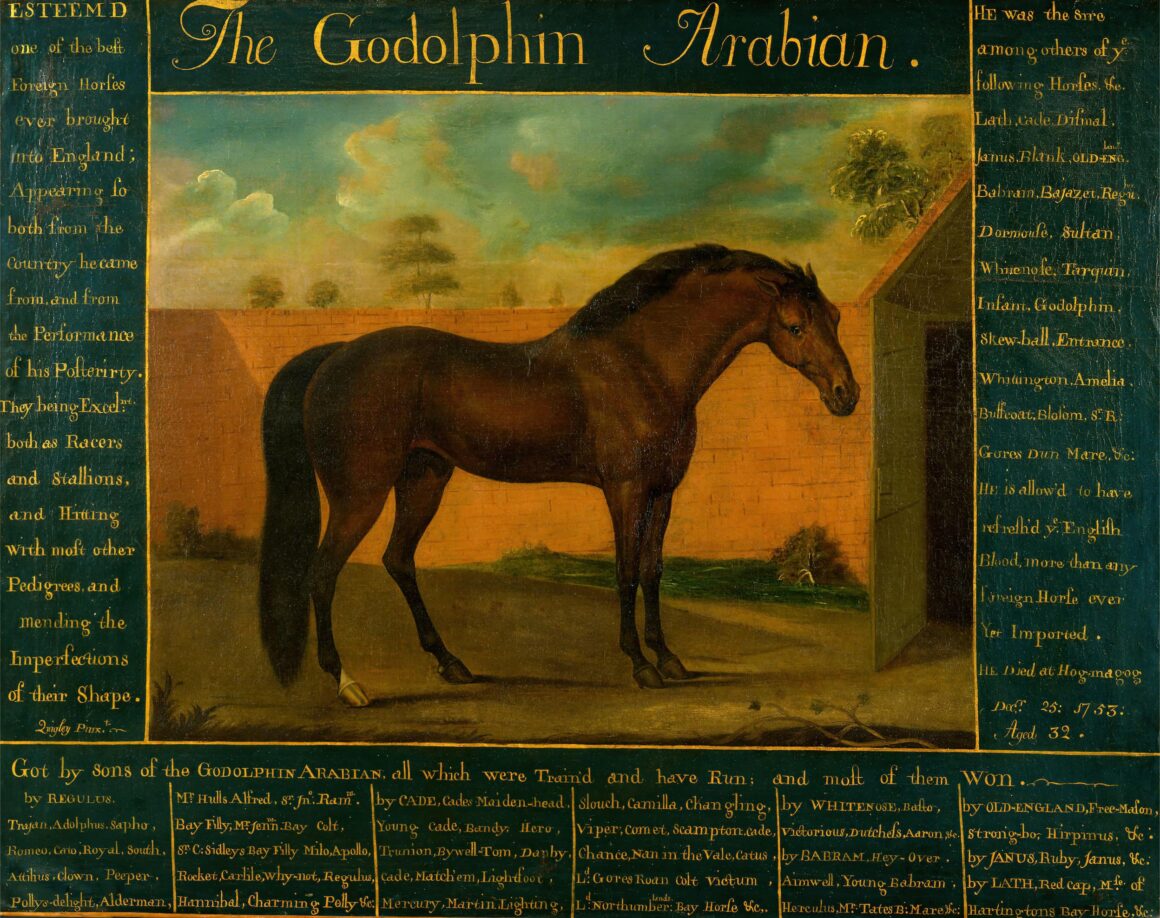 Along with the Byerley Turk and the Darley Arabian, the Godolphin Arabian was one the three foundation stallions from which all modern thoroughbreds are descended. The last of the trio to arrive in Britain, he is sometimes referred to as the Godolphin Barb, because he came to Europe from Tunis, situated on the Barbary Coast, but the Godolphin Arabian is the more accurate description.

A brown horse standing only 14.3 hands, his origins are a matter of dispute and various colourful theories have been put forward. One unlikely tale is that he was discovered pulling a water cart through the streets of Paris and bought for £3. However, a more reliable version is that he was foaled in the Yemen and was exported via Syria to Tunis. He was reputedly one of four Arab horses presented by the Bey of Tunis to King Louis XV of France. He was subsequently bought when six years old by Edward Coke of Longford Hall, in Derbyshire.

When Coke died in 1733, he bequeathed the horse to Roger Williams, who ran the St James’s Coffee House in London and also acted as a bloodstock agent. He then sold the Arabian to Francis, the second Earl of Godolphin, whose stud was at Gog Magog in Cambridgeshire.The Godolphin Arabian’s two most notable sons were Lath and Cade, both out of the mare Roxana. Lath was the better racehorse but Cade proved the better stallion and sired Matchem, one of the greatest stallions of the 18th century. It is through Matchem that the Godolphin Arabian’s line survives today. A third mating with Roxana in 1739 produced Regulus, another good racehorse who subsequently became the sire of the dam of Eclipse.

The Godolphin Arabian died on Christmas Day 1753, aged 29, and was buried at Gog Magog. His name is commemorated today by Sheikh Mohammed’s successful worldwide racing operation.In terms of heredity, the Godolphin Arabian was probably the least important of the three foundation stallions. His European influence survives through the 1980 2,000 Guineas winner Known Fact and his son, the champion miler Warning.

The last Derby winner of the Godolphin Arabian’s sire line was Santa Claus in 1964. However, several great North American horses of the past trace back to the Godolphin Arabian, including Seabiscuit, along with Man o’ War and his son War Admiral. More recently, the American sire line has continued through the dual Breeders’ Cup Classic winner Tiznow