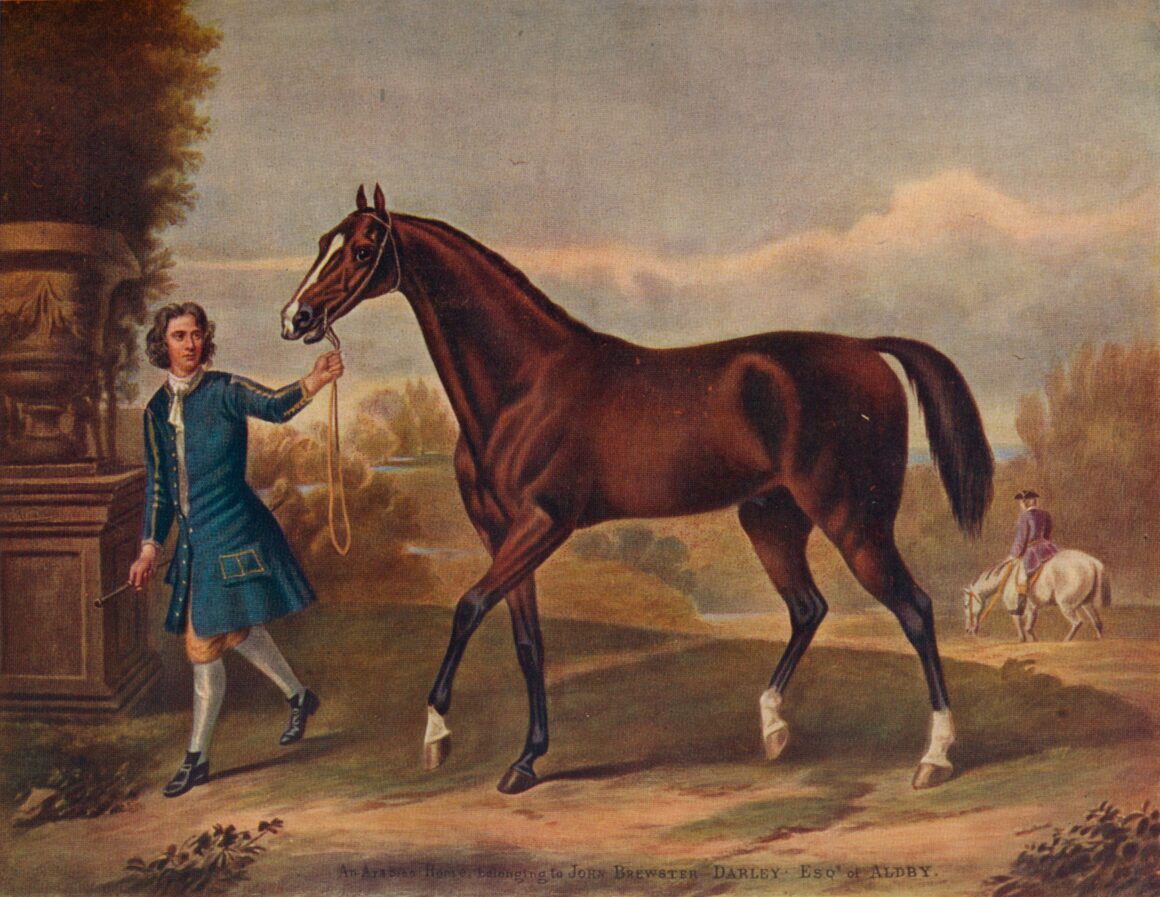 Standing about 15 hands tall, the Darley Arabian was the second of the trio of foundation stallions from which all thoroughbreds are descended. Today his male line far outsteps those of the other two, the Byerley Turk and the Godolphin Arabian, accounting for almost 95% of modern racehorses.

He was bought as a four-year-old by Thomas Darley, described as an agent in merchandise and also a British consul based in Aleppo, Syria. Darley’s membership of a Syrian hunting club gave him invaluable horse-trading contacts. Having purchased the horse from Sheikh Murza II, he sent him to his brother Richard’s Aldby Park Stud, near York.

A bay with a white blaze and three white feet, he was stated to belong to “the most esteemed race among the Arabs by both sire and dam”. He covered mostly Darley’s own mares. One of the few outside ones was named Betty Leedes, owned by Colonel Leonard Childers of Carr House, near Doncaster. Their liaisons resulted in the full-brothers Flying Childers (1715-1741) and Bartlet’s Childers (1716-1737).

Flying Childers was sold to the Duke of Devonshire and is credited with being the first great racehorse. However, it was Bartlet’s Childers – initially known as Bleeding Childers due to his tendency to break blood vessels, before being sold to Mr Bartlet of Nuttle Court, near Masham, in Yorkshire – who proved the better stallion and continued the Darley Arabian’s dynasty. He sired (fathered) Squirt, who sired Marske, who in turn sired Eclipse. Another of the Darley Arabian’s sons, Bulle Rock, was the first thoroughbred to be exported to America.The Darley Arabian spent his whole stud career at Aldby Park. He lived to the ripe old age of 30 and is now the ancestor of the vast majority of modern thoroughbreds in the direct male line. His importance to the breed is enormous. Most of the powerful lines of the 20th century, including the St Simon, the Blandford, the Phalaris and the Gainsborough lines, emanate from the Darley Arabian.

Phalaris was the sire of Nearco, the leading sire in Great Britain and Ireland in 1947 and father of five Classic winners. Nearco sired Nearctic, who in turn sired Northern Dancer, whose dynasty has long dominated the breed throughout the world, most notably through his son Sadlers Wells and Sadlers Wells’ own son Galileo.