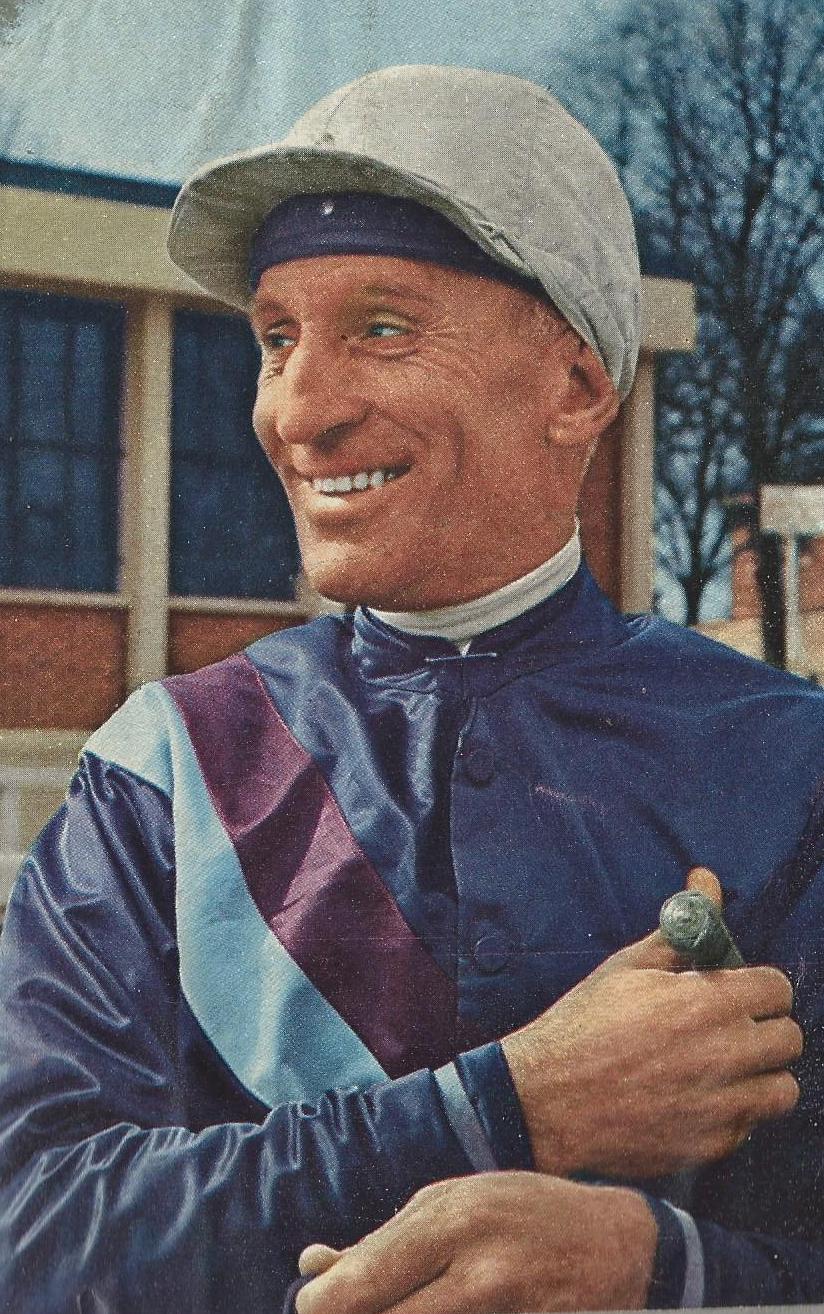 Australian Scobie Breasley was Britain’s champion jockey four times. A master in his judgement of pace and at riding a waiting race, he excelled in bringing his mount with a late challenge to prevail close home. It was often hard to tell, after Breasley had won by inches, whether he had been flat out or had a few pounds in hand.

Christened Arthur Edward Breasley but always known as ‘Scobie’, he was born at Wagga Wagga on 7th May 1914. His nickname emanated from one of the best-known Australian trainers of the first quarter of the 20th century, Jim Scobie. A friend of Breasley’s father, noting young Arthur’s passion for horses, said: “That lad of yours is a regular little Scobie”. The name stuck.

Apprenticed to trainer Pat Quinlan, he rode his first winner aged 14 on a horse named Noogee at Werribee, Melbourne in August 1928. With around 1,000 winners and three Australian jockeys’ championships to his name, Breasley first came to England in 1950 to ride for Druid’s Lodge, Wiltshire trainer Noel Cannon. The following year he won the 2,000 Guineas on Ki Ming but headed home at the end of the season, returning in 1954 and winning that year’s 1,000 Guineas for Cannon on Festoon.

Three days after Festoon’s triumph, Breasley suffered a fall at Alexandra Park, his injuries including a fractured skull, which in turn upset the optic nerves, causing partial loss of vision and lack of balance. Doctors said his career was over and that he wouldn’t be able to walk unaided again. Amazingly, just three months later he was back in the saddle, having battled his way back to fitness through a combination of fierce determination and many hours spent on the golf course.

In 1956 he was appointed stable jockey to Sir Gordon Richards, an association that endured until Breasley’s retirement 12 years later. He became champion jockey for the first time in 1957 with 173 winners. Having finished runner-up for the next three seasons, he regained the title in 1961 and retained it for the next two years. His title battle with Lester Piggott in 1963 lit up the final weeks of the season and went down to the very last day, with Breasley recording 176 wins to Piggott’s 175.

Aged 50, he won the Derby in 1964 on Irish-trained Santa Claus and won it a second time two years later on Charlottown.

Breasley retired in 1968 having ridden 3,251 winners worldwide, 2,161 of them in Britain, and set up as a trainer at South Hatch Stables in Epsom. In 1972 he saddled Ravi Tikkoo’s Steel Pulse to win the Irish Derby.

When Tikkoo transferred his horses to France at the end of 1975, Breasley moved there as his private trainer. Less than a year later he relocated to America, where he trained successfully in both New York and California before ending his career as multiple champion trainer in Barbados.

Breasley subsequently returned to Australia where he died on 21st December 2006, aged 92.