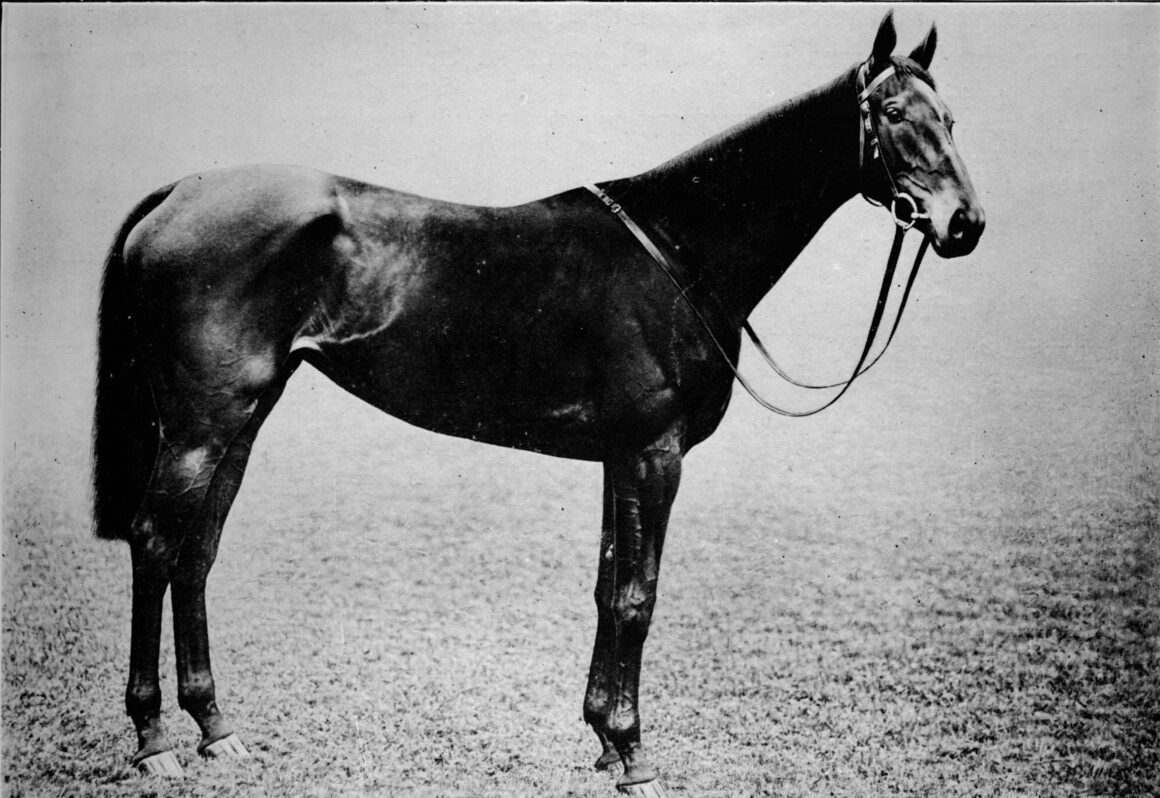 Sceptre is the only horse to have won four British classics outright. (Formosa also won four but they included one dead-heat.)
Bred by the 1st Duke of Westminster at his Eaton Stud in 1899, Sceptre was by the Prince of Wales’s Derby winner Persimmon out of Ornament, a full-sister to the great Ormonde. The Duke died later that year and in 1900 his bloodstock was sold by public auction. His Triple Crown winner Flying Fox was sold for a record 37,500 guineas, while Sceptre was bought for 10,000 guineas by Robert Standish Sievier, a man of few moral scruples and difficult to deal with but, at the same time, an engaging rogue and hard to dislike. He ran a publication called ‘The Winning Post’ in which he regularly poked fun at and made scurrilous allegations about various prominent racing figures.
Sievier put Sceptre into training with Charles Morton at Wantage. She comfortably won her first race, the Woodcote Stakes at Epsom, then added the July Stakes and Doncaster’s Champagne Stakes.
When, at the end of that season, Morton accepted an offer to become private trainer to Jack Joel, Sievier decided to train Sceptre himself, despite his lack of experience. Sceptre was a leading contender for the classics but Sievier’s unorthodox methods saw her make her three-year-old debut in the Lincolnshire Handicap, in which she was narrowly beaten.
She proved her resilience by winning the 2,000 Guineas in record time, turning out two days later to win the 1,000 Guineas. An ill-judged ride by her inexperienced jockey cost her the Derby but she immediately returned to winning ways in the Oaks. Sievier then sent her to France, where she was unplaced in the Grand Prix de Paris. She ran twice at Ascot, winning the St James’s Palace Stakes, and twice at Goodwood, where she won the Nassau Stakes. She then claimed her fourth Classic, winning the St Leger as she pleased.
Financial pressures forced Sievier to sell Sceptre early the following season. Sir William Bass bought her for 25,000 guineas and sent her to Manton trainer Alec Taylor. Having won the Hardwicke Stakes, she ran next in the Eclipse, taking on Derby winners Ard Patrick and Rock Sand in what is acknowledged as one of the 20th century’s greatest races. Entering the final furlong, Sceptre was in front but Ard Patrick got up in the final strides to win by a neck, with Rock Sand third.
Later that season, Sceptre won the Jockey Club Stakes, beating Rock Sand by four lengths, then won three more races including the Champion Stakes.
At stud, Sceptre bred four winners but had been barren for nine years before she died at Exning Stud, Newmarket, on 5th February, 1926, aged 27.