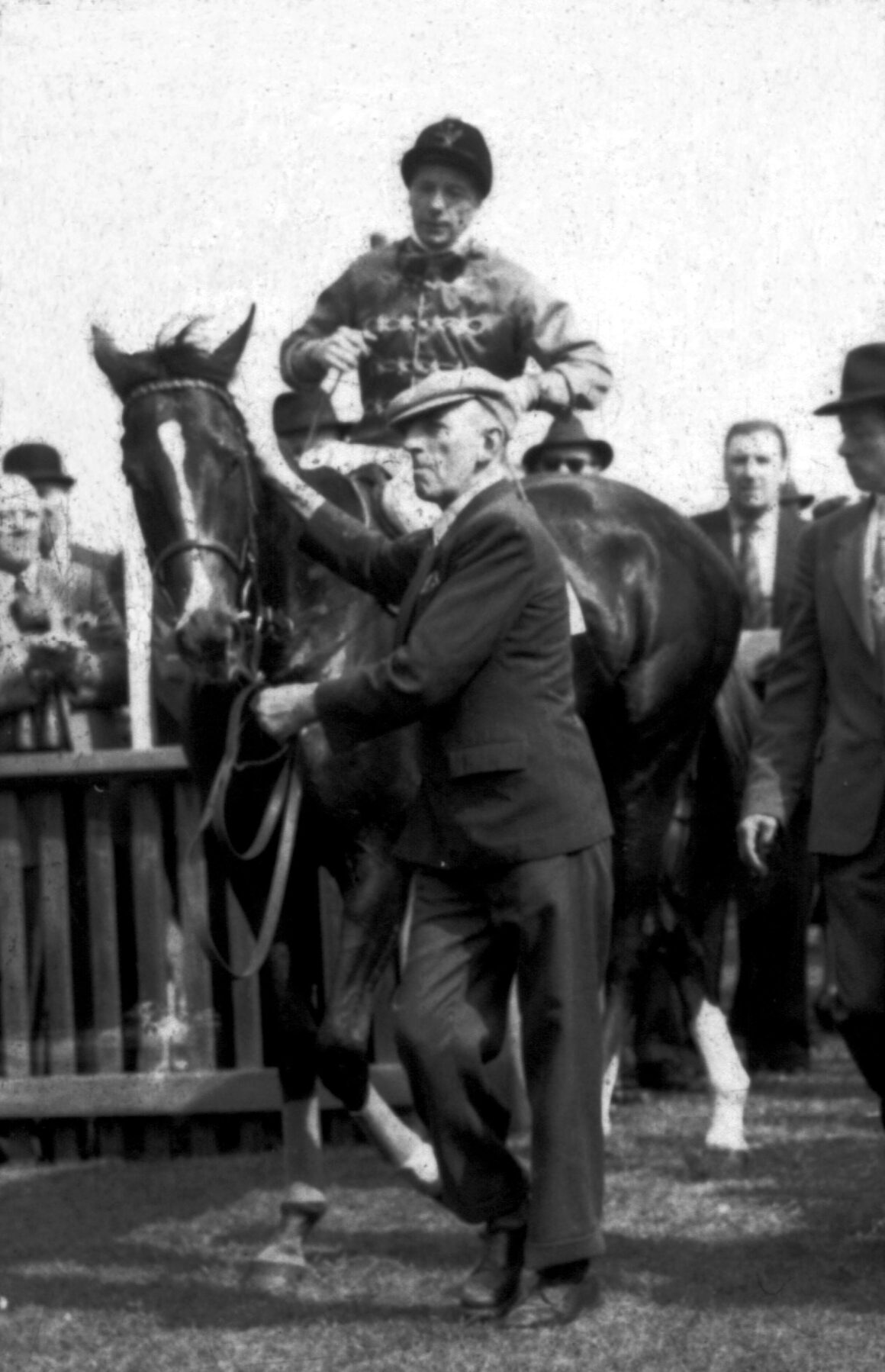 Born on 21st November 1917, the son of a Shottesbrooke, Berkshire farmer, Doug Smith was Britain’s champion jockey five times during the 1950s.
He followed his elder brother Eph in becoming apprenticed to Major Fred Sneyd at Sparsholt, near Wantage, riding his first winner on Denia in the City Bowl at Salisbury on 26th May 1932.
In 1937, the last year of his apprenticeship, he was champion apprentice with 45 wins. A vision defect rendered him unfit for active war service and he was thus able to continue riding. In 1943 he was retained to ride for King George VI, whose horses were trained by Cecil Boyd-Rochfort. He achieved his first Classic success in 1946 on the King’s filly Hypericum in the 1,000 Guineas.
At the end of that season, Smith succeeded Harry Wragg as stable jockey to Lord Derby. Lord Derby died in 1948 and was succeeded by his heir, the 18th Earl, for whom Smith rode Alycidon to win the Ascot Gold Cup, Goodwood Cup and Doncaster Cup in 1949. He was unlucky not to win that year’s Derby on Lord Derby’s Swallow Tail, receiving a hefty bump from the winner, Nimbus, and being beaten a head and the same into third place.
Smith was champion jockey for the first time in 1954 and retained the title for the next two seasons. He finished fourth in 1957 but regained the title in 1958 with 165 wins including the 2,000 Guineas on the Queen’s colt Pall Mall, thus becoming the only jockey to ride Classic winners for two reigning monarchs. He was champion again for the fifth and final time in 1959, his most important success that year being the 1,000 Guineas on Petite Etoile. Smith was particularly effective in long-distance races. In addition to two Ascot Gold Cups, he won the Doncaster Cup seven times, the Cesarewitch six times, and the Goodwood Cup and Northumberland Plate three times each. He also excelled on two-year-olds, winning five Middle Park Stakes, four Dewhursts and the Coventry and Gimcrack Stakes three times each.
He suffered a fractured skull in a fall at Liverpool in October 1964 but was back in the saddle the following season. He retired at the end of 1967, having ridden 3,111 winners in a career spanning 37 years.
Smith began training in 1968 and made a perfect start when his first runner, Owen Anthony, won the opening race of the 1968 season at Doncaster. In 1969 he trained Lord Rosebery’s filly Sleeping Partner to win the Oaks and the Ribblesdale Stakes. Based at Loder Stables, Newmarket, he trained successfully throughout the 1970s, retiring in 1979.
On the morning of 11th April 1989, Doug Smith was discovered drowned in the swimming pool of his Newmarket home. His brother Eph had also been found dead, in a shallow stream near Newmarket in 1972.