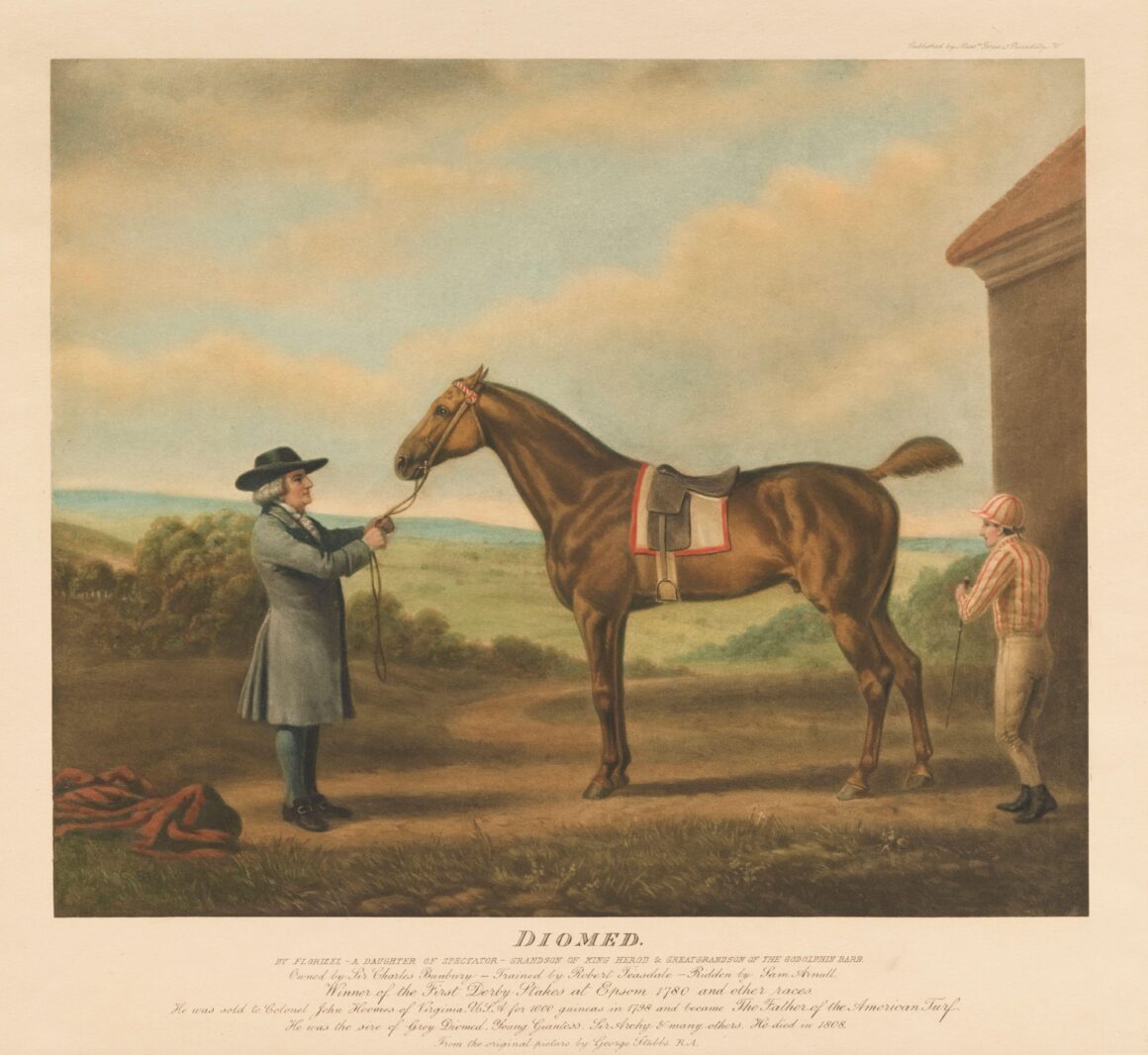 A powerfully-built chestnut by Florizel, one of Herod’s best sons, Diomed was bred by trainer Richard Vernon at Newmarket and sold to Sir Charles Bunbury, for whom he won the first running of the Derby in May 1780, ridden by Sam Arnull. He was unbeaten in seven starts as a three-year-old. At four he won twice at Newmarket but was unable to run at five. Returned to racing the following year, he won a four-mile King’s Plate at Guildford but his racing career was ended when he pulled up lame in a race at Lewes.

Diomed retired to stud and stood initially at Uppark, in Sussex, then at Sir Charles Bunbury’s Great Barton home in Suffolk, but he was not a success as a stallion. Indeed, his fee, which started at 5 guineas, had dropped to just 2 guineas by the time he was sold to an American colonel named John Hoomes for 50 guineas and exported to Virginia at the advanced age of 21 in the summer of 1798.

English bloodstock experts believed Diomed was no longer of any value as a stallion. In fact, the secretary to the owner of the General Stud Book warned his purchasers: “Mr Weatherby recommends you strongly to avoid putting any mares to him (Diomed), for he has had fine mares to him here, and never produced anything good.”

Maybe it was the change of scenery, the American air, the feed, or the treatment, for he not only survived the arduous Atlantic journey but something happened to give the old horse a new lease of life. He was champion sire in 1803, the first season his progeny ran in America. His Virginia purchasers soon discovered they had got a rare bargain because he founded a dynasty, siring high-class horses who won big races and became influential stallions themselves. For his last stud season in 1807 his fee was $50.

Many of America’s greatest horses, such as Lexington, descend from Diomed. An American writer observed: “Without Diomed, the most brilliant pages of our turf history could never have been written. Taking him all in all, Diomed, as a progenitor of the American race-horse, stands alone, towering magnificently in accomplishment above all others.” There was much mourning in Virginia when Diomed died in 1808. Incidentally, the breeches that Sam Arnull wore when winning that first Derby on Diomed now hang inside the Jockey Club’s Newmarket headquarters.