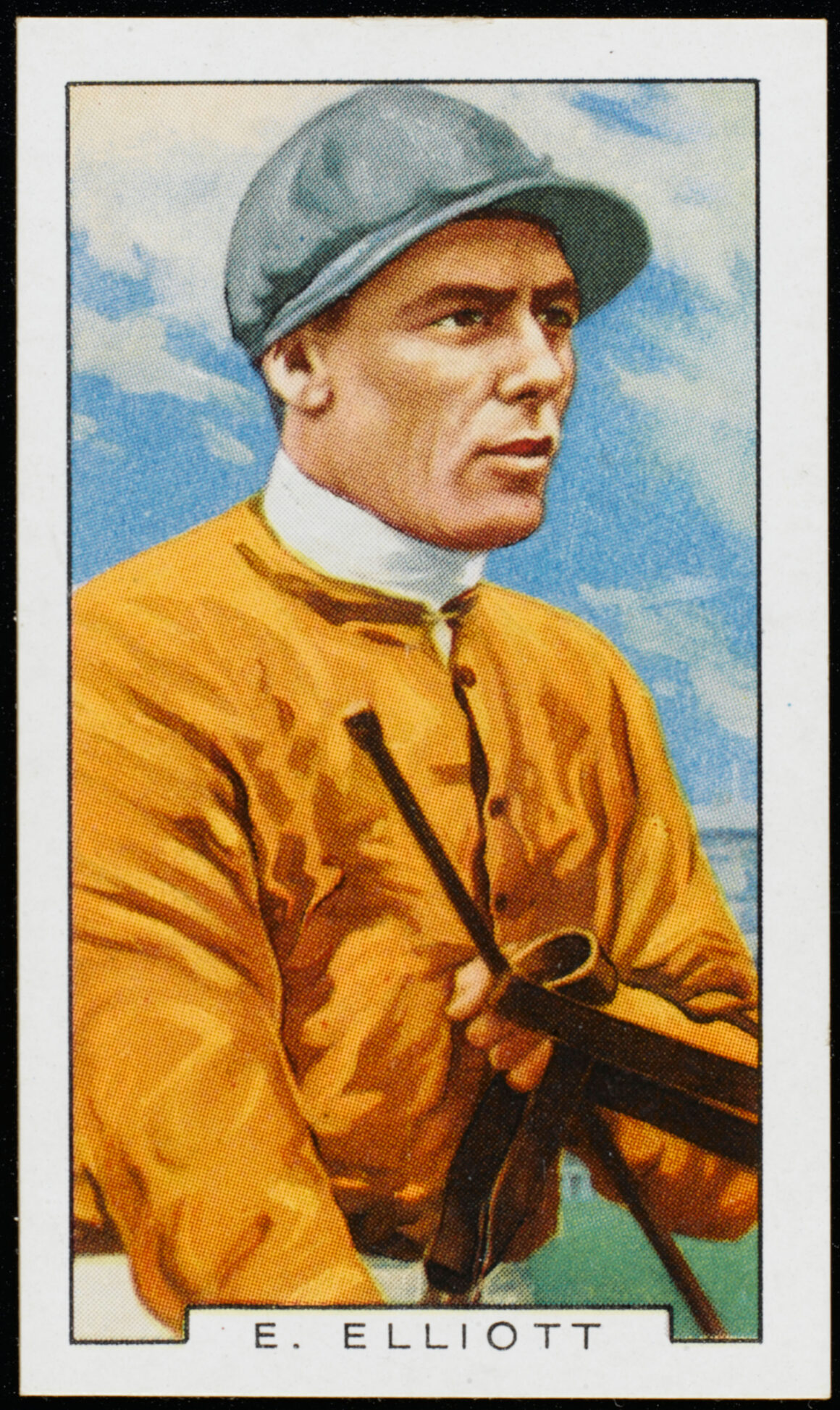 Charlie Elliott was born in Newmarket, where his father was travelling head lad to trainer Lord George Dundas. Apprenticed to Jack Jarvis, he rode his first winner when aged 16 on Rakings at Nottingham on 22nd March 1921. Half an hour later he completed a double on Golden Myth.

Golden Myth was the horse that got him established, for he rode him to win the following year’s Gold Vase and Gold Cup at Ascot and Sandown’s Eclipse Stakes. In 1923 he won the 2,000 Guineas on Ellangowan and ended the season as joint champion jockey with Steve Donoghue, both having ridden 89 winners. He was still an apprentice when becoming outright champion in 1924 with 106 wins including the 1,000 Guineas on Lord Rosebery’ filly Plack.

He achieved his first Derby victory in 1927 on Call Boy, trained by Jack Watts, making virtually all the running and winning by two lengths. Later that season he won the Royal Hunt Cup and the Champion Stakes on Astérus, owned by Frenchman Marcel Boussac.

Soon after landing the 1928 2,000 Guineas on Flamingo, Elliott relocated to France to ride for Boussac, winning the Prix du Jockey Club (French Derby) four times for him between 1931 and 1939. He also won successive runnings of the Prix de l’Arc de Triomphe in 1936 and 1937 on Corrida and the 1939 Grand Prix de Paris on Pharis II.

He won the Epsom Derby for a second time in 1938 on Bois Roussel, returning to England on the outbreak of war the following year. He won four wartime Classics, namely the 2,000 Guineas on Djebel in 1940 and Lambert Simnel in 1941, the 1943 Oaks on Why Hurry and the 1944 1,000 Guineas on Picture Play. In 1946 he landed the Ascot Gold Cup and Prix de l’Arc de Triomphe on Marcel Boussac’s Caracalla, along with that year’s Coronation Cup on Ardan and the Goodwood and Doncaster Cups on Marsyas.

He secured his third Derby victory in 1949 on Nimbus, the race being decided for the first time by a photo-finish camera, which showed that Nimbus had beaten French raider Armour Drake by a head, with Swallow Tail a further head away in third.

In 1951 Ellott won the inaugural running of the King George VI and Queen Elizabeth Stakes, run that year as the Festival of Britain Stakes, on Supreme Court, trained by Evan Williams. He retired at the end of 1953 and went back to France to train for Boussac, sending Elpenor over to win the 1954 Ascot Gold Cup. He trained four French classic winners for Boussac before returning to England in 1958. He then trained a small string at Newmarket but had little success and did not renew his licence after 1963.